A research project that used NEURON to study Multiple Sclerosis

What Is Multiple Sclerosis?

Multiple Sclerosis is an autoimmune disease that affects the central nervous system (CNS) and has impacted over 2.1 million people worldwide. Multiple Sclerosis is caused by the degeneration of myelin, the protective covering that surrounds nerve cells. Nerve signals called action potentials are unable to propagate through the nerve fibers called axons due to the degeneration of myelin. 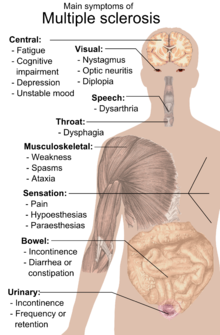 The figure on the left is a summary of the symptoms a patient of MS may suffer from. Symptoms usually appear in short bursts called relapses. As time goes on and a person suffers multiple relapses, the function of the nervous system progressively declines. Multiple relapses begin to come without warning. MS patients must be especially careful of the common cold or flu because many times, these viruses can cause relapses.

The true causes of MS are yet to be determined. Some scientists speculate that it may be a hereditary disease but no strong evidence suggests this.